Eighteen years ago during the spring of 1995 on a small island in the Mississippi River off the shores of St. Paul MN at an abandoned power plant a group of artists observed Beltane using the medium of fire. 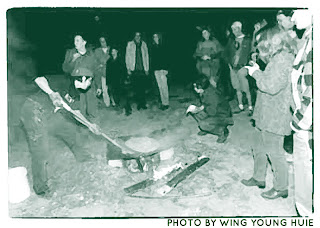 Without knowing that Beltane translates as "fire of the god"(1), or
that cakes played an important role in Beltane, or that one piece of cake would traditionally be marked and he who received it would be sacrificed to the fire...

I cooked giant pancakes with a marble hidden inside.

Earlier in the day, I had dug a pit and assembled a stove with a sheet of salvaged stainless steel and some bricks.

Earlier in my life, I had unknowingly come to understand convection principles through observing my mom opening and closing the damper to control the heat of the kiln. When my giant pancake stove needed more heat, I intuitively pulled out a brick to create a heat transfer current that would stoke the fire thus raising the temperature of the cooking surface.

I used a snow shovel to flip the pancakes.

(1) Cormac derives the word Beltaine from the name of a god Bel, or Bil, and the Old Irish word tene, “fire.”

Hurray! Our friendship is old enough to vote!

Hey there, I found your blog very informative and helpful. I've read almost all your blog posts and would really love to read more of it. I request you to please start your blog once again. I suggest you also syndicate your blog on popular sites like ManagementParadise.com where you will find millions of like minded people as a ready audience. Keep Blogging. Cheers!