San Antonio Summit at the Poetry Capital of New Hampshire 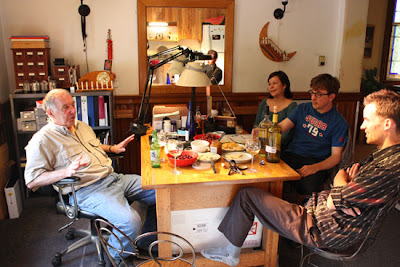 Guess who we rustled up in Bethlehem during our visit with George Manupelli? None other than Bunnyphonic and Ian, recent transplants from San Antonio to Concord, New Hampshire. 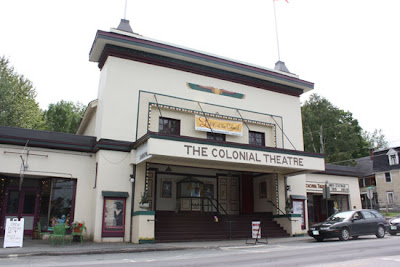 The Colonial Theater, where we saw the Alloy Orchestra accompany Von Sternberg's film "Underworld." This would be a great room to play! Maybe next time we get to Bethlehem. 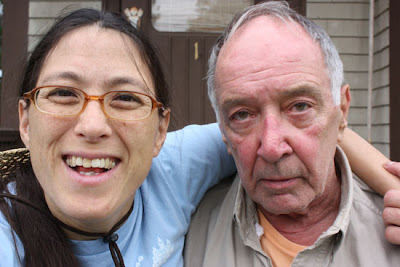 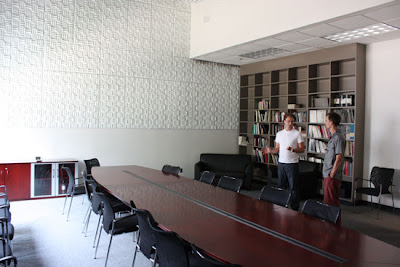 At Syracuse University, Department of Transmedia chair, Heath Hanlin, begins our tour in the conference room. 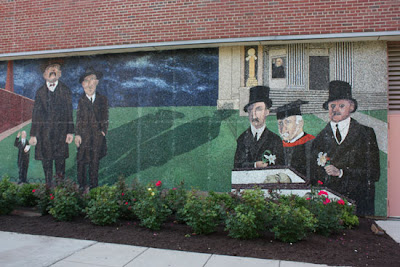 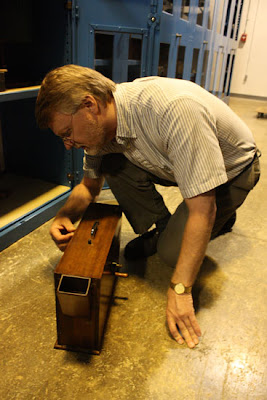 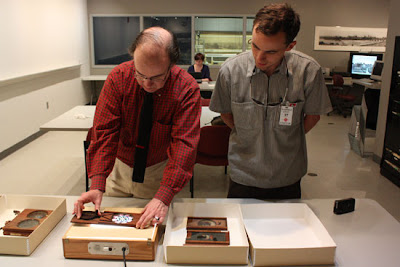 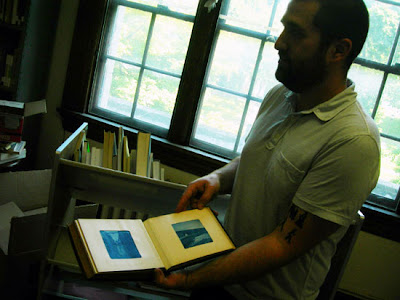 We wandered into the Visual Studies Workshop in search of Afterimage offices, and met Tate Shaw, VSW director, who is holding an all-cyanotype personal photo album from the school's library. 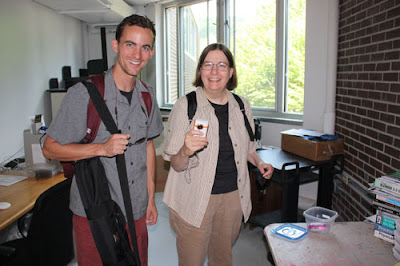 Jason with prof. Barbara Lattanzi who is showing us a flip camera kit in her 5-walled office. (Tripod not included.) 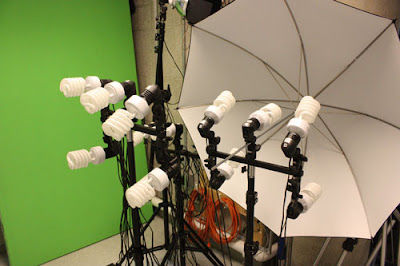 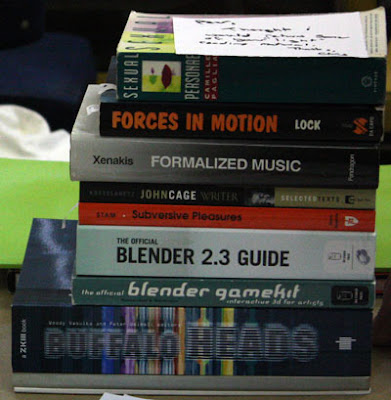 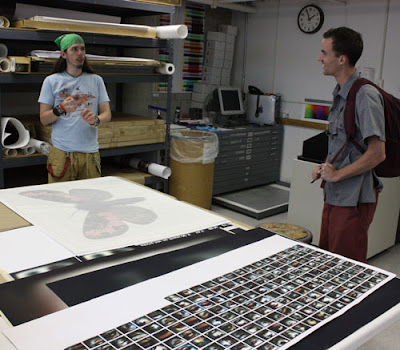 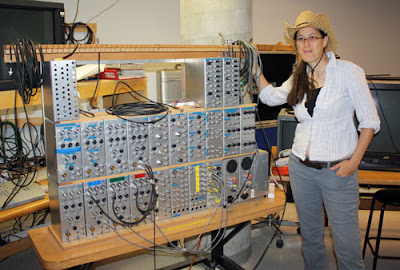 a Sandin Analog Image Processor!!!!
Posted by elray at 12:08 AM No comments: 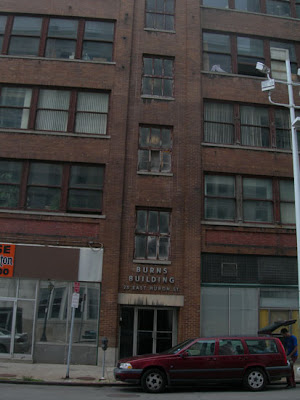 We stayed in Jax DeLuca's studio in downtown Buffalo with a bird named Jules. The door to his cage was always open, and the cage was next to a huge open window (on the 4th floor-- upper right corner of this photo).
UB Department of Media Study 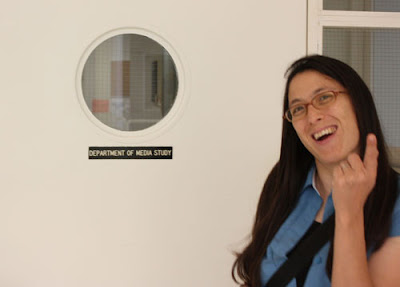 We went to the famed hotbed of media arts culture straightaway. SUNY Buffalo is the place that Dr. Gerry O'Grady started the Center for Media Study in the mid-70's. He brought Paul Sharits, Hollis Frampton, Steina, Woody Vasulka, James Blue, and others together to teach in his center, which is now a "department."
How or why did Dr. O'Grady, a medieval scholar, build such a powerful center for the exploration of contemporary moving image art, and why in Buffalo? Media artist Barbara Lattanzi (UB graduate now teaching at Alfred University) informed us that he had lived in NYC for some time and was socially hooked into Warhol's Factory, and was a close follower of McLuhan, who also happened to be a medieval specialist, and who's legacy lives on in nearby Toronto, where he taught. 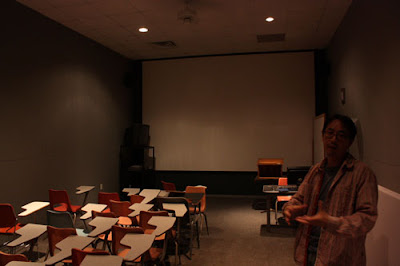 Here is Carl Lee, who showed us all around. Carl supports the technical infrastructure of the Department, and is a video installation artist himself. He came to Buffalo when his wife, Dorthea Braemer, took a job as the director of Squeaky Wheel. 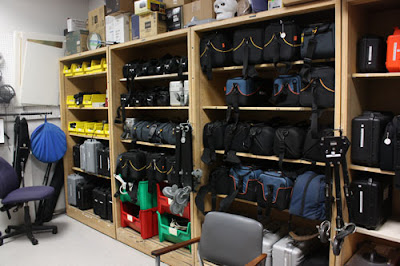 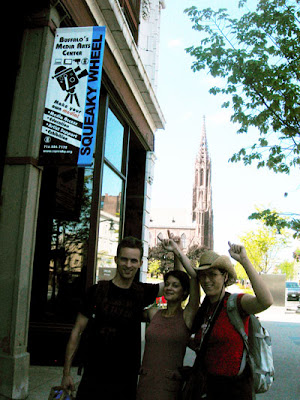 PBL with Jax DeLuca, Programming Director of Squeaky Wheel. I met her a couple years ago when the NAMAC conference was in Austin. 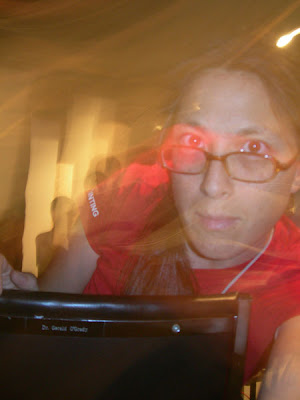 Dr. O'Grady's chair in the Squeaky microcinema room!! It's got his name on the back. When he founded the Center for Media Study at UB, he also started Media Study Buffalo-- a community media center with equipment access, classes, screenings, etc. In the early '80's a boiler blew in the building that housed it, and forced its closing. Squeaky Wheel was founded out of energy that had been generated from MSB. 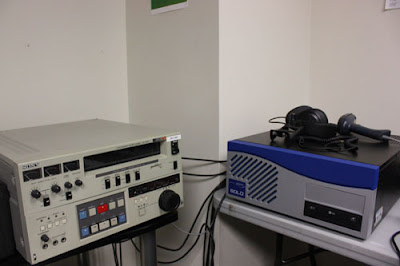 The Samma Solo (on the right) is a state-of-the-art media conversion machine, hooked up to the U-matic 3/4" video deck (left). One of the major Squeaky Wheel projects is media conversion, and they are in the process of converting their archives, as well as the Hallwalls archives (which include things like Larie Anderson's first Hallwalls performance). One of the tricky parts of the process is only being able to play these old video tapes one time, because they are so delicate from age that they decompose as they are running through the system. 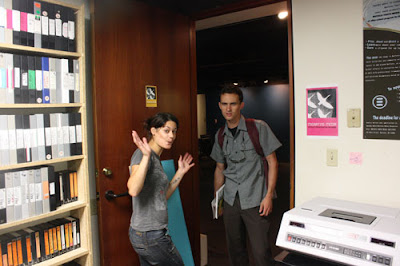 Jax and Jason in the media conversion room.
Finally, some pictures from the gig on saturday night of Jax' band w ((a)) ou w who warmed up the crowd for us. 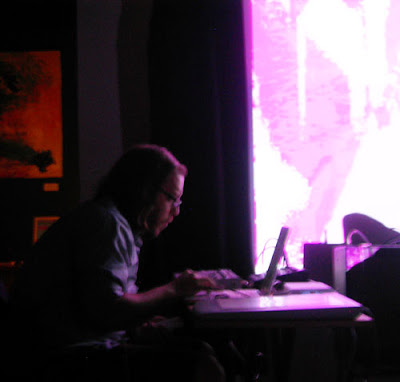 Brian Milbrand on the images 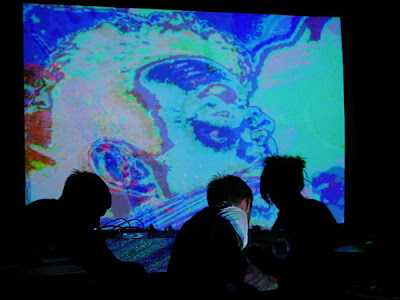 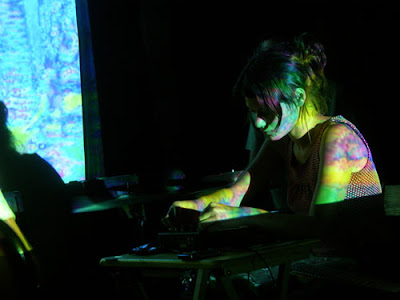 Jax DeLuca on the knobs.
Jim Abramson is not pictured, but played drums.
Posted by elray at 5:06 PM No comments: