The good life. Six blocks away from the bike trail system is where we landed in Minneapolis. Our friend David Pitman, a man with many bikes, hosted us at his place in the Seward neighborhood, HQ of the Monoplex and K-ICE. It rained several times, but was mostly cool (compared to San Antonio) and sunny (though not oppressively so, as in south Texas). I biked around a lot. Riding on the Midtown Greenway was like Utopia. 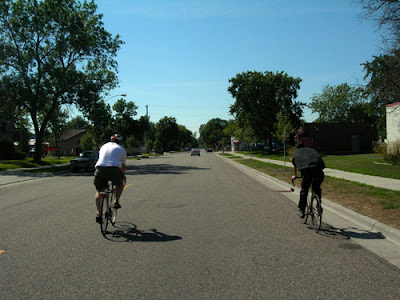 My bike gang, me (not pictured) David and Jay, riding through the Seward neighborhood to breakfast on Sunday morning.
It was a real treat to attend and perform at The Bearded Child Film Festival. After eight years, director Dan Anderson took his Grand Rapids MN experimental film festival for a run in Minneapolis, at the Bedlam Theater. I'm glad he did-- it's time to share the bounty of his unique vision somewhere with the potential for a larger audience.

I was super impressed with the programming-- lots of new talent I'd never seen before, high-quality work selected with a keen eye for the absurd, odd, and/or personal film that challenges the norm. The Bearded Child was awarded an Arrowhead Regional Arts Council grant this year (which is McKnight Foundation money), allowing them to bring in several special guest artists (including PBL), and this was a major component that enriched the wonderful time I was already having.

I had the pleasure of VJ-ing at the opening night after-party just across the light-rail tracks at Medusa with DJ Danny Seligman. We hit a good groove, and it was a lot of fun improvising to his mix of reggae and film soundtrack samples. Before we went on as the closing act, however, I was treated to some really interesting solo acts that combined the hardcore punk energy of my younger days with digital tools. This is a logical evolution, as computers are so integrated with our daily existence nowadays.

Lepercaves, for example, billed as a "spastic blast from Boulder," screached menacingly into a mic over a heavy, grounded beat that was emanating from his laptop. When he started tossing chairs around the room, in traditional combative male rocker style, there was a real tension created (for me) by the fact that his 2000$ laptop was sitting nearby. At one point, his software crashed and he called out to the audience "Ya gotta' love computers-- raise your hand if you have a computer!" Everyone raised their hand and cheered, as he scoffed while waiting for the thing to reboot. I enjoyed his performance, and experiencing the perilousness of his testosterone flailings in such close proximity to that delicate and vulnerable piece of machinery. 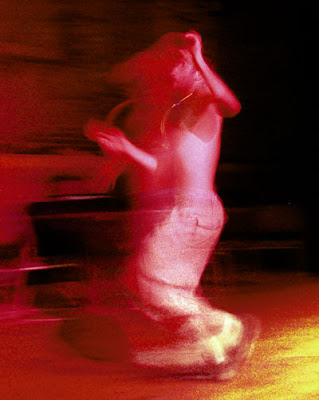 Here is the dynamic Matthew Silver (New Jersey) during the performance before a screening of his videos, which are nearly as high-energy as he is in person. He was frantically relaying a bizarre story about being in a plane-crash due to a chicken getting sucked into the engine. He is a doctor, and he discovers a cure for cancer (which both of his parents are afflicted with) while stranded on a tropical island. The whole time, he's running around the room, vigorously flinging his body in dynamic contortions that reflect the absurdity of the story he was telling. He pulled if off brilliantly. 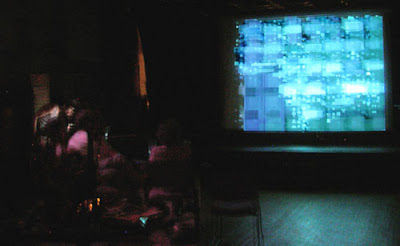 It was a real treat to take in Brent Coughenour's (Milwaukee) live cinema performance "The Indomitable Human Spirit." Over the course of the piece, stunning, pulsating, abstract images that were like a moving painting, very, very slowly shed the extremity of their pixilization and became recognizable forms. Brent manipulated his digital files with what appeared to be a Guitar Hero video game controller. It was a satisfying descent into a zone of relaxed ambience.

Other stand-outs from the week include:

Eric Patrick (Evanston) - Ablution in the "Best Of" screening

Judith Zdesar (Austria) - Images of a Diary of Waiting


Check out this preview article that Minneapolis writer Cindy Collins wrote about our show.
Posted by elray at 10:03 PM

It's Danny Sigelman, not Danny Seligman.