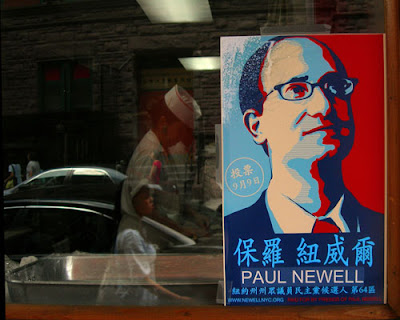 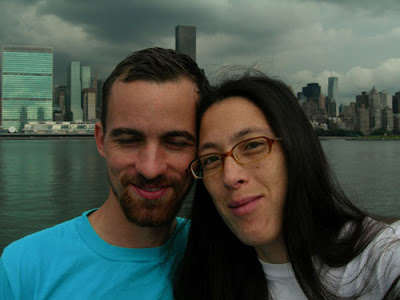 It's always fantasitc to be in The City. Last year when we did the Lab at the Roger Smith Hotel gig, Eric Dunlap of Forward Motion Theater came by and hung out with us one night. We met Eric several years ago in Detroit when he was in town with some dance gig. He knew the Disassembler, AKA Deon Foster who, along with Jim Ryan, is of one of my all-time favorite AV acts: the Shenanigans and we were there together to play the JOMAS DVD release party at Gallery 555.

When we saw Eric last year, he invited us to play Eyewash, a highly respected showcase for AV artists booked by he and his creative partner, the awesome Holly Daggers. The series is supported, in part, by public funds from the New York City Department of Cultural Affairs and the New York State Council on the Arts. I have nothing but high praise for Eric and Holly. These two are serious Do-ers who are not only excelling at their own art, but are producing a comprehensive and legitimate context for its consideration. 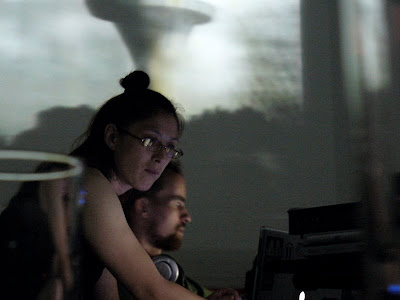 photo by Noelia Santos
Eyewash goes down once a month at Monkeytown in Brooklyn. There's a room in the back which has a big projection screen on each wall, low couches against the walls around the whole room, with low coffee tables so that people can order and eat the excellent food prepared in the Monkeytown kitchen. The artists set up in the middle, playing in-the-round act by act. This is one of the mosts exceptional rooms that we have ever played, and we were in good company with Wetcircuit, Luke DuBois (pictured below), and Guiaumetrix. 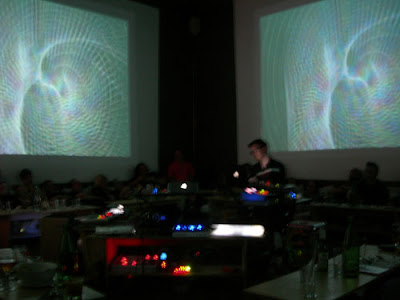 I met Sean LaFleur of djnyc after the early set, and he enthusiastically commented about the organic, human feel of our work in comparision with the cool-technological quality of the other acts. "It was like slipping on a pair of worn jeans," he said. And I like that.


SHARE NYC
This was the first time we got in on Share, the regular meet-up and jam session of AV geeks who produce music, visuals, and code. I was the only female participant, although there was another woman with a laptop, she was checking her email. 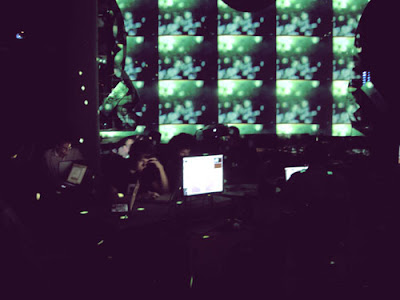 The picture above looks like it could have been shot at the library, but I had fun playing with my images and talking with others about what they were doing, the hardware and software they were using, and projects they were developing. 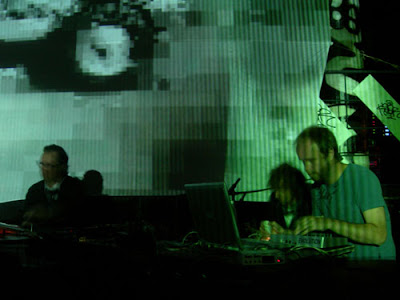