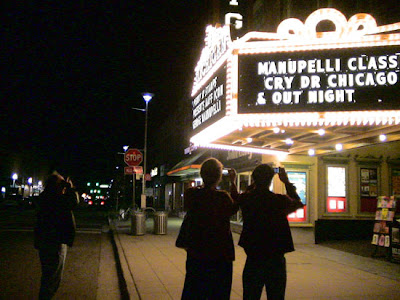 Before I launch into my rant, I must first commend the special programs at this years festival: Mark Hosler; George Manupelli's talk; Michele Silva presenting the Bruce Connor retrospective; Pat Oleszko's performance; Remixing the Rules panel; Gerry Fialka's Ann Arbor Pioneers lecture; and the Canyon Cinema screening. As for the competition screenings, this year's opening night is a decent example of mixing up a range of styles-- my only critique there is to add something challenging. An example of problematic programming is the last half of the 'Shadows of the Night Sea,' where the works suffer from being stylistically and temporally too similar. 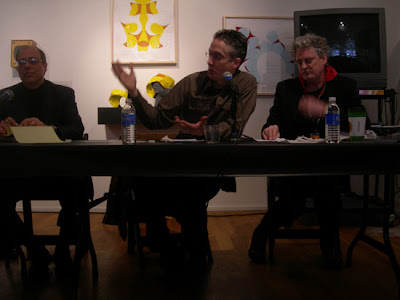 Larry Jordan (lawyer, not the filmmaker), Mark Hosler, and Craig Baldwin
Last year, I wrote about the success of screenings that included multiple genres, and the failure of the programs that grouped like works together. The attitude of the leadership seems to be that change is necessary, and that the "old-timers" are adverse to it. Ruffled feathers aside, the programming of the competition screenings over the past couple years at the festival has generated a heated discussion. It was the subject of Gerry Fialka's McLuhan Tetrad this year during his workshop, and I'm going to add my new thoughts here.
I have nothing against curators-- these folks really work at delineating meaning from a glob of undifferentiated matter, and there are some extremely talented people out there, many of whom were at the festival (Craig Baldwin, Gerry Fialka, David Dinnell, and Adam Hyman, to name a few). I believe there is a place for specialized, themed programming, but it's not at the Ann Arbor Film Festival.
The festival leadership currently professes the need to "get butts into seats." This is a bit of an awkward issue because the chair of the board, Bruce Baker, is also on the board of the Michigan Theater. (see note below) Russ Collins, Michigan Theater Director, is also on the film festival board. Setting this small "conflict of interest" aside, though, the new style of programming is geared to the specialist, so I see this in direct opposition to the stated goal of gaining a larger audience.
One other aside here-- as I have been attending more and more "experimental" festivals over the years, I am constantly surprised at two things: the Michigan Theater as a venue has no equal; and the audience numbers can't be touched-- other festivals are lucky to see 10% of the crowd that comes to the AAFF. 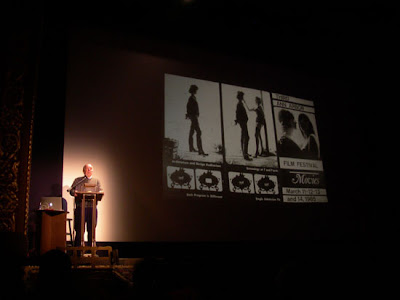 George Manupelli on the Michigan Theater stage
As festival founder George Manupelli stated during his talk as the Penny Stamps Distinguished Speaker (a special weekly lecture series hosted by the U of M School of Art & Design at the Michigan Theater) on Thursday afternoon: Who does the festival belong to? It doesn't belong to the board of directors-- it belongs to the filmmakers and to the audience. I got teary eyed before he, himself, got choked up on the stage. George expressed later that when they started the festival, they had no idea how it would grow and become something so much larger than themselves. 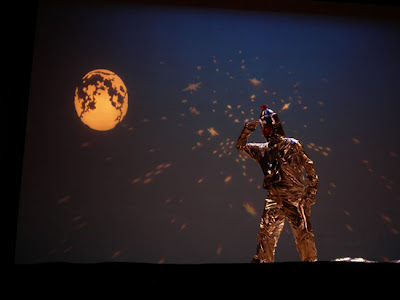 Pat Oleszko's Saturday night performance on the main stage
Again, the current trend in programming the competition works at the AAFF is geared towards the specialist-- what does this mean?  When putting like films together, an audience well-versed in distinguishing the subtleties between similar tempos, textures, and themes could benefit from comparing them in close proximity to each other. This strategy, however, tries the patience of the generalist; someone who does not make "experimental" moving image art a central life interest becomes bored and restless. I admit that many of us who do love experimental work also get bored and restless. Trying to help the audience "get it" becomes a moot point because people are getting impatient.
Let's not alienate our potential converts, who likely constitute the majority of our audience! If the goal is to lure in and convert the generalists, the formula that worked so well in the past (and yes, of course change is inevitable, but please don't throw out the baby with the bath water!) was to mix it up. (e.g. "Freeform"-- it's no accident that AAFF programming echos Ann Arbor radio WCBN's infamous programming style). This kind of programming must come from a deep familiarity with the work, and a willingness to set aside the curator's prerogative in favor of the needs of a larger, generalist audience. Leave room for the audience to find and make the connections. This is what the brain does automatically, anyhow. "Let the people have the power" goes beyond the politics of the 1960's... I believe that its infiltrated the very root of the AAFF, and is one of the reasons for its success.
I ran into Ann Arbor artist Helen Gotleib at a going away BBQ for old friends in Ann Arbor during the festival. She reminded me that, in the past, artists contributing work to the silent auction (yet another casualty to the recent changes) would be given a festival pass. She told me how much she loved being able to jump into any screening and be confronted with the unexpected at all times-- to see things she would never have seen anywhere. This year, she and her partner were reduced to trying to navigate the categories and pick something that might be worthwhile. She reported that she missed the variety, the randomness, and the surprises.
One way to find out what the audiences like and want would be to do a survey. And one way to take advantage of the curatorial talent associated with the festival would be to focus it on serving the audience.
Finally, I must affirm my desire for the competition works to be on the main screen-- the "Silver Screen" as George put it. Many of us were disappointed last year, and this is George's one strongly stated wish for the festival: to prioritize the filmmakers and the continued creation of new work by featuring it on the "Silver Screen." This kind of appreciation can only be demonstrated by concrete action, as we have just witnessed with the Obama administration paying its respects to the arts by including it in the stimulus package. 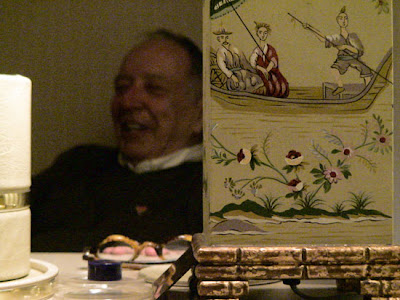 George Manupelli
The Ann Arbor Film Festival is a part of who I am, and I am a small part of what it has been and is. Over the course of the last 17 years I have watched hundreds of moving image works, been an intern, shown my films in the competition, been on the screening committee, organized and programmed sidebar screenings and special events, won an award, fought in the front lines for opening the festival to digital, led parades, made work for the lobby, hung out in the green room and the back alley, had the honor of calling filmmaker friends when their films screened or were awarded...I could go on...  I am all for change, but feel very deeply that this change must serve the integrity and the best interests of the festival.
Posted by elray at 12:42 PM

I stand corrected: Bruce Baker hasn't been on the Michigan Theater board for a few years now.

Topics for Discussion: The Direction of the Ann Arbor Film Festival
#47
by Martin Shackelford

The Festival this year was a bit too curated, ghettoizing the films in categories, and inflating the role of “curators” who really didn’t add to the quality of the Festival in any apparent way, but misled people by the way they labeled things that never quite seemed to fit the labels. This seems to have been the primary contribution of “art director” Christen McArdle, a nice person who means well, and who fought the good fight against the censors, but who doesn’t seem to really understand what the Festival is about. Also, they continued to have programs of films in competition opposite each other, making it impossible to see them all. In addition, for the first time, they were so enamored of the “special” programs that they put some of the films in competition programs in the screening room, and the “special” programs in the main theater. One of their group managed to get a puff piece in Detroit’s Metro Times, praising the new order to the skies, and denigrating the “out of touch” previous directors, who had kept the Festival going for forty years, and gave it an international reputation. The writer claimed the Festival had gotten “a bad reputation,” but didn’t say with who—certainly not with filmmakers, among whom it is legendary.
Festival founder George Manupelli directly criticized some of the “art director” changes in the Festival, and advocated for a return its roots.

The first program on Tuesday night was the kind of audience-friendly group of films that keeps people coming back to the Festival. Unfortunately, the “curating” has made this kind of program less a part of the Festival. It is a sort of curating that may be appropriate for a film archive or a museum, but not a living, breathing entity like the Film Festival. I found myself more frustrated and less impressed with the films this year. One curator did two programs, and his justified insecurity about what he had done was expressed when he felt it necessary to talk about each of the films before the program began—no one else did this, to my relief. Christen made the mistake of telling the audience before one of the programs that all three films had won awards—and then telling us which awards. This was before we had seen the films, and before the awards had been announced. Very disturbing, as I told her afterward.

The Thursday evening programs managed to maintain a good degree of variety. The other days were more disappointing, though good films were interspersed.