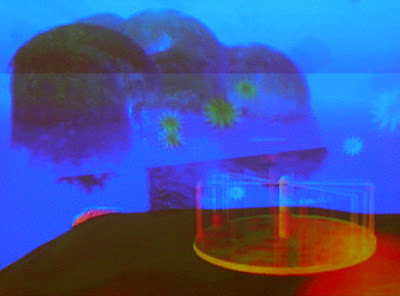 a still from the live mix
"It's going to be hard, but it'll be worth it!" This is the new mantra given to me by my new boss (chair of the UTSA Art & Art History Department) Greg Elliott, at the start of this year. (He says: "I'm not your boss! I'm just the guy you ask for money!") During my time at the conference, I worked my ass off as the New Media Caucus exhibition committee chair! We mounted the exhibition "@" at SCI-Arc, and it was an amalgamation of Second Life and Real World situations/objects.  So it was hard, but it was definitely worth it.
The New Media Caucus is a College Art Association affiliated group that formed in order to focus the potential of the academic new media art contingent in one arena. Many of us are the lone voice in our respective departments, are forging the way with new ideas and media into unrecognizable terrain, and benefit from the backing of an organization sanctioned by the larger academic community.
One of the important things that the NMC has done during its short existence (6 years) was to write the guidelines for review of faculty teaching in new media arts-- something that maybe only those of us in academia can appreciate... but it was a relief to me that this CAA-validated document existed, providing some concrete guidelines for my perplexed colleagues when they review my record. 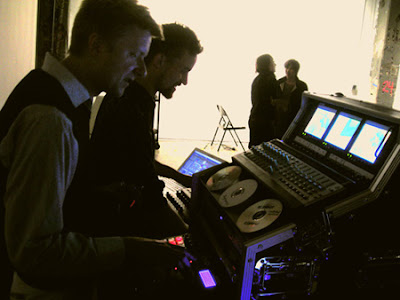 Anyhow, enough of that... Here's a shot of Johnny Dekam, and Jason. Potter-Belmar Labs got to jam with Be Johnny for the NMC reception of the show "@," and it was a blast-- really great to plug my video signal into Johnny's rig & have a buffer between me and the screen for a change. On account of finally making it to Second Life (to attend meetings with my colleagues for the organization of the exhibition, believe it or not), I ended up sampling a bunch of imagery from that virtual world to use in the mix.
Posted by elray at 11:11 AM