We had a fun few days with some experimental music performances, edgy films and videos, and general cross-culture pollination on the occasion of the Bearded Child Film Festival coming to town (thanks UTSA New Media Program), the No Idea Festival just around the corner in Austin ushering in Jason Kahn (thanks also Swiss Arts Council + UTSA) and Annette Krebs, and the overlap of  John Mata's "Sala Diaz Is Open" project.

Dan Anderson introducing his Best of Bearded Child Film Festival program at UTSA
In the same room, the night before the BCFF screening, we held the panel: "DIY and the Avant-Garde." Chris Cogburn (No Idea festival founder & director) imparted the idea that we can all encounter an experimental music set together, but essentially each one of us is also alone in our experience. This reminds me of the similar notion in experimental film, one that Dave Hickey discusses in an essay from Air Guitar about his experience viewing experimental film during his college years. In it he describes the a-ha moment while watching "Haircut," by Andy Warhol. There is the excruciatingly slow activity of the haircut, of nothing seeming to happen... for a long time, of the rise of his self-awareness as a viewer, and the discomfort of the audience. The ongoing internal dialogue in this case, and an important counterpart of the aloneness that Chris talked about, breaks into collective relief and shared joy as the protagonist finally reaches into his shirt-pocket for a cigarette. 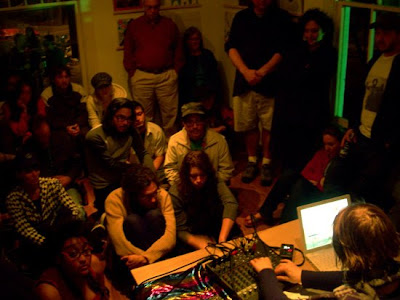 Annette Krebs performing at "Sala Diaz Is Open" to a packed room. We all listened intently. 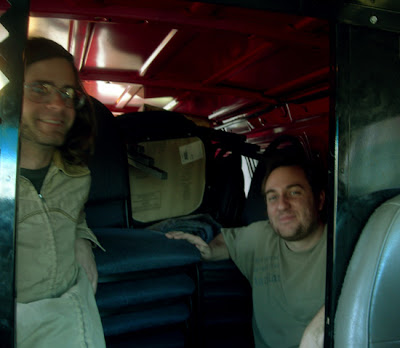 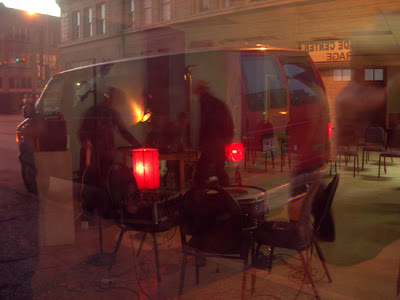 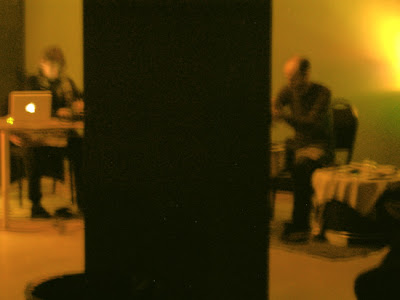 Annette Krebs and Chris Cogburn performing at the Beauty College
Annette and Chris opened for Jason Kahn. A focused quietness filled the room. One guy sipped from a pint bottle of whiskey. We were on the horse-drawn-carriage tourist ride route. The street sound-scape offered up the clomping of horses' hooves, a car alarm, (the absence of the train that we usually hear outside of Salon Mijangos), a skateboard on the sidewalk. Brakes, shoes, a honk, and revving engine. Door creek.
Annette K had her guitar on her lap, rubbing it with a steel scrubby pad. I imagined that she's had that guitar since she was 15, and in a punk band... but that's just my fantasy, she informed me later. Chris C came off as a conjurer, bringing presence to the present, creating that space for us to be by ourselves, together.
7 or 8 men entered into the space, and two of them began to whisper back and forth, sapping the fullness of this poised, riveted moment; pulling from the focal point, not consciously participating. I could keep thinking about these ideas, but after a little while whispered over to them: 'If you guys are going to talk, would you please go in the back?' One guy quips "I was waiting for them to start." I found out later that he is the owner of the Beauty College who had let us hold the event in his place. It was a culture clash with a fellow who may like the attention that art draws to his building, but may not necessarily like, or even care to understand the art itself. I'm not really sure what to do with that, other than to observe.
Conversely, Patrick Zeller and I talked at the intermission, and he divulged that he was really working at "being open, patient, and listening." This music is certainly far outside the mainstream, and demands a different attitude from its audience-- one that Patrick nailed. Being open to an unknown experience may bring risk, but it has potential for great reward, too. It seemed like this music was a new experience for Patrick, but being an artist who travels and photographs outside of his own culture primes him for unique encounters. 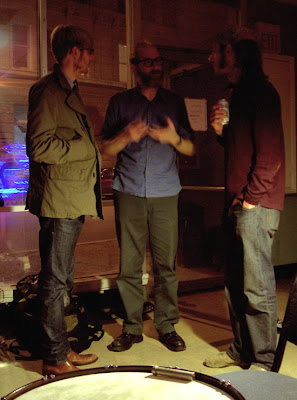 Jason Kahn flanked by the Boyd Brothers, after his performance
As for Jason Kahn's set, I was struck by the physicality of the music. He played a drum, modulated by electronic implements. Fine-tuning frequency, manipulating wavelength, modulating the analog hand-signal on the drum by way of the electronic tool/control panel, like a vehicular dashboard. He transfixed the audience through a wall of sound, a physical, spatial, dynamic experience. Sound oscillating, Kahn's rocket-ship blasted the audience into orbit (like the time I saw Susie Ibarra play in the Diego Rivera Courtyard at the Detroit Institute of the Arts)-- a space-time machine. Its best to surrender.
Posted by elray at 12:54 PM