We flew to Detroit to spend a couple days visiting family, then hopped the Amtrak Wolverine for a 6-hour ride to Chicago.  After dropping our bags in my colleague Paul Catanese's office in the Interdisciplinary Arts Department of Columbia College, we walked to the south end of Millenium Park where I sat by Lake Michigan next to the observatory on the most beautiful spring day while Jay checked out the Planetarium. 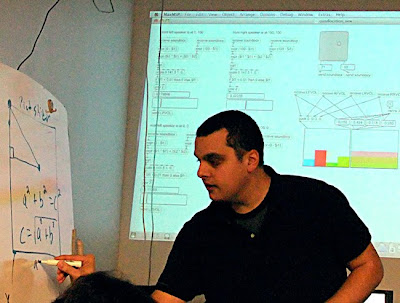 Before we gave our presentation in Paul's graduate sound art class, he did a 1-hour lecture on programming Max/MSP for moving sound through a multiple speaker set-up.  He was really excited to use the Pythagorean Theorem to work out the distance from signal to speakers. 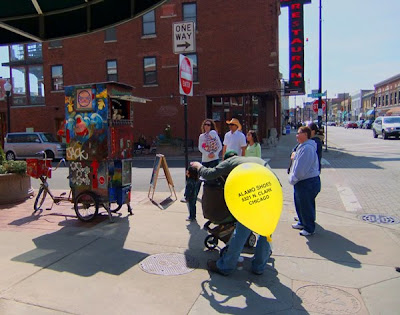 The next day was also gorgeous, and we walked to Chicago Filmmakers from our digs in Edgewater, stopping for bagels at a Jewish deli along the way.  The bike puppet theater was under full swing, attracting a surprisingly huge plethora of kids who were out and about with adult supervision that morning.  This was right next to Alamo Shoes (for all of y'all back home in San Antonio).
The day of our gig, I woke up to snow!!  Oh yes, to be treated to the midwestern spring tease was a real joy!  It was frigid out there, as we discovered when we trekked 2 blocks to the Ethiopian restaurant for lunch with the chill blowing right down into the bones.  I didn't have the foresight to bring any long underwear, but did have a pair of wool socks, a knit hat and a scarf.  It won't be long before the wall of 100 degree days hits south Texas, so I relished the cold to its fullest extent.
When I was at school for a little while in Chicago in the late 80's/early 90's I spent many many hours in darkened theaters watching film of all kinds-- in class at school, at the Music Box, at Randolph Street Gallery when the Experimental Film Coalition was active, etc.  I saw my first Craig Baldwin film at Chicago Filmmakers, so it was an extra-special treat for me get to perform there. 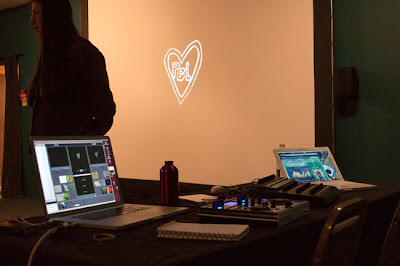 Despite the nasty weather, we had a big audience that included several old friends and acquaintances from the different pasts of out lives, such as Jay's wild days in Kalamazoo and my time adjunct teaching at University of Michigan.  An old pal from my stint in Chicago was joining us on his birthday, conjuring up some curious magic for the PBL DVD door prize give-away.  The first DVD went to Sean's wife Michelle, and though I mixed up those ticket stubs like a good air mix lottery machine would, the second went to Sean himself, who turned it down and picked the next winner.  Strangely, it turned out he was sitting next to a guy who was also celebrating his birthday that night!
We carried a solid performance and it felt great to spin our craft before this crowd of artists, poets, filmmakers, neighbors, and some who were simply out with friends not knowing what they were getting into.  Post-performance Q & A drifted down the street to the bar, as a warm front moved into the area.
Todd Lillethun (programmer at Filmmakers) and his partner Brandon (on a Philosophy of Physics fellowship at U of Chicago) were consummate hosts-- we can't thank them enough for their hospitality, which coalesced with a very early Sunday morning ride downtown to Union Station to catch our train back to Detroit. 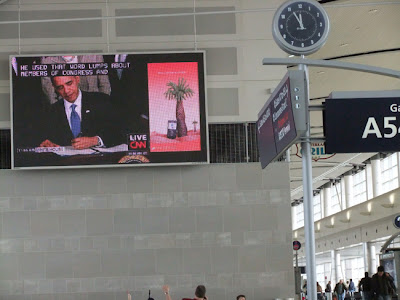 We spent a little more time with family, including watching the heath care vote with my folks.  On one of the huge monitors at the Detroit Metro Airport, we caught the historic moment of Obama signing the bill just before we got on the plane back to San Antonio.
Posted by elray at 5:37 PM