We went to H-Town for "Co-Existing & Co-Llaborating," an Aurora Picture Show screening featuring the video work of six collaborating couples, and to follow up on Media Archeology biz (we have been invited by Aurora to take part in the 2010 festival, coming up in mid-September).  It became apparent that a return trip within the next week or two was going to be inevitable, so heres a mini-report on these goings-on. 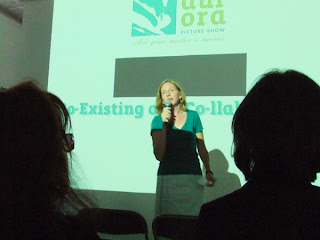 Aurora Picture Show director Mary Magsaman introduces the screening to a full house.  We had a fun couple days with the McCoys, another collaborating couple with work in the screening, who were there from NYC with their 2 kids.... all of us presenting in Mary's Interdisciplinary Art class at U of H, doing an interview for the KUHF, a lively Q/A session after the screening, and just generally hanging out. 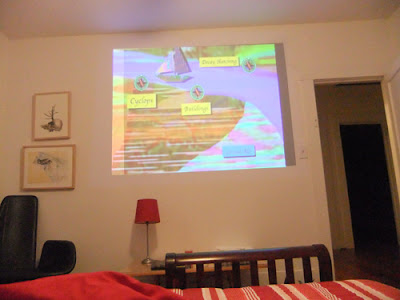 Getting to stay at the Aurora office is always a treat because of the video library!  The screening room doubles as a guest room, so we can watch video art projected on the wall across from the bed-- here is the menu screen from a LowVid DVD.
The site we selected for our Media Archeology project is the Heights Theater which was built in 1928 and has some interesting history to it. Functioning as an art gallery nowadays, we worked on securing it as the location for our new piece which will riff off some of that fascinating history-- namely that it was burnt down in the late 60's because it was showing "I am Curious: Yellow." 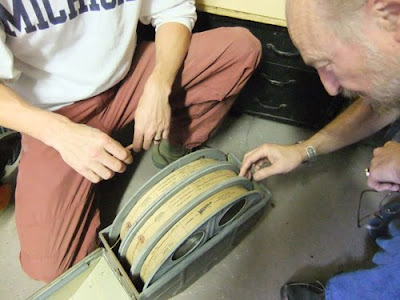 Here is Jason with Heights Theater owner Gus Kopriva in a storage room at his Redbud Gallery.  He is showing us the 35mm film print which looks to be in great condition.  For whatever reason, the print was never returned to the distributor and we got to open the cases for he first time since they were closed up over 40 years ago! 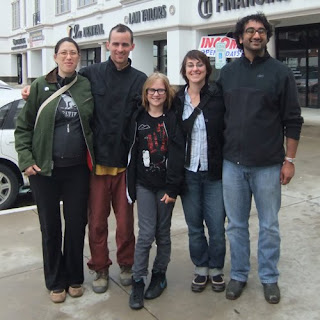 The credit goes to our good pal Dr. Tish Stringer for introducing us to the Heights Theater when she took us around Houston months ago on a field trip of potential sites for our project.  This picture shows me, Jay, Iris, Tish, and Herb just after a ritual Saturday morning dim-sum session.  YUM.  Houston has a large Asian population, resulting in awesome dim-sum. 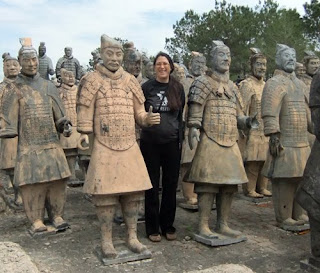 On our way home to San Antonio, we dropped by the Forbidden Gardens, a somewhat forlorn roadside attraction sporting a 1/3 size fiberglass replica of the Xi'an tomb site of Qin Shi Huang-di (along with a few full sized warriors) complete with a park employee in the tedious process of cleaning it; a miniature dilapidated model of the Forbidden City; a rather dusty exhibit of an imperial dinner table complete with imitation foodstuffs; and a room full of traditional weaponry, mostly bolted down to discourage visitors from getting overly interactive.
Posted by elray at 2:06 PM

I visited the FG 15 years ago, and it was pretty darned interesting. Do they still have all the koi in the ponds? Rumor at that time was the gentleman was working on a 1/2 scale of the Great Wall. Any news on that?